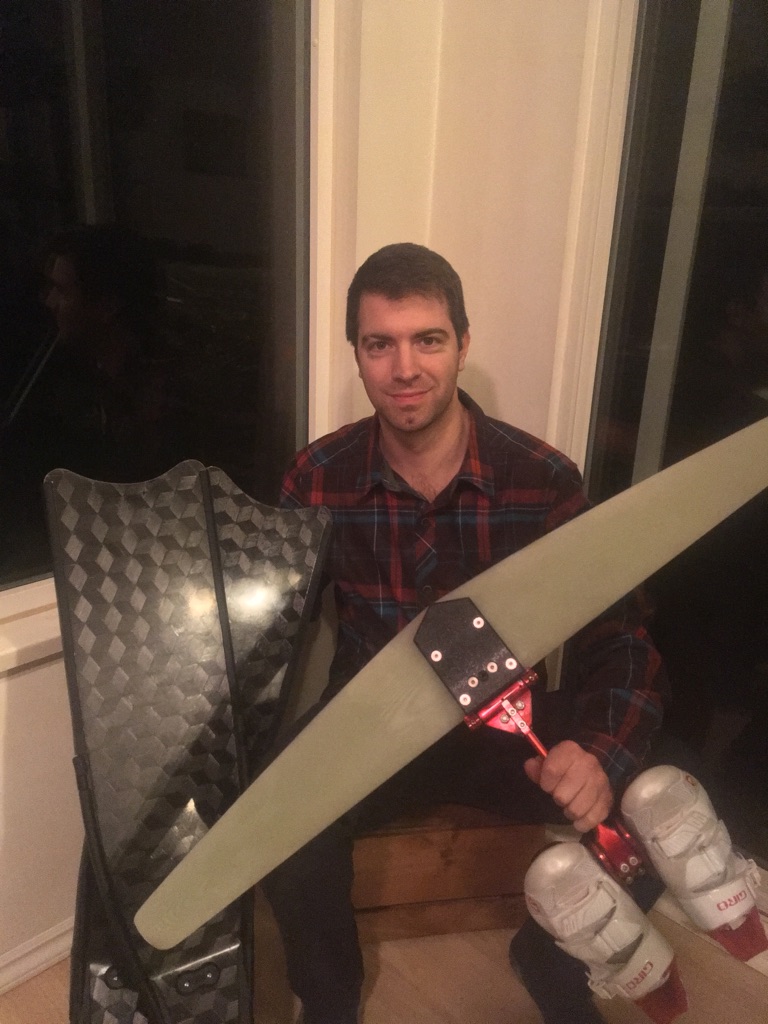 Chris and his homemade carbon fins and his monofoil.

This is an interview with Chris Campbell, a marine engineer based in Vancouver, Canada. He has been working on a new style monofoil for 2 years and makes his own carbon fin blades. I had the pleasure of picking his brain over everything related to freediving fins. Some of his insights might surprise you.

In case you’re not familiar with some of the terms:

You can also read a more general article on freediving fins here.

Most divers don’t like to travel with monofins. Are modular monofins possible?

“Yes they are definitely possible but not without sacrifices in performance. There would be additional weight and drag that would increase a divers’ energy expenditure. That and the added cost would likely prevent it to come to market. But of course you could make something custom. ”

What is it about carbon fins that makes them so efficient?

“The short answer is that carbon is very elastic and does not elongate. This is due to the carbon filaments that are encased in epoxy. The elasticity allows you to bend the blade, and that energy is returned to you as the blade springs back. In contrast plastic has very poor elasticity and high elongation.

Fiberglass actually can have the same amount of elasticity but you have to use more material to achieve it. Additionally with fiberglass you elongate more of the blade. Hence, as most people know, the performance of a fiberglass fin is in between that of a plastic and carbon fiber blade.”

In a past guest article we showed that the difference in performance between fiberglass fins and carbon fins is hard to measure. But both are a big improvement from plastic. See the article.

How do our unstreamlined bodies impede fin design?

“Hydro-dynamically speaking we are bricks. Actually, bricks might be more streamlined than us. Regardless, we focus a lot of time trying to make ourselves as “streamlined” as possible with body positioning. We would probably be better off changing our surface shape.

When it comes to hydrodynamics, less is more. The most efficient swimmers in the ocean are jellyfish, and they are just discs. The fastest are elongated symmetrical foils, like tuna.

We are nothing like either, there are all sorts of drag pockets in our bodies: our armpits, our crotch, the back of our heels, our chin. These create turbulence and drag and kicking fins through turbulent water is not efficient. Turbulent water is moving in a variety of directions, and that is not conducive to propulsion. The best fin design would actually put most of the fin blades outside of our bodies’ turbulence path.”

What do you think of the common monofin that competitive freedivers use these days? Do you see any design flaws?

“Unfortunately the flaws are in the application, The designs are solid and well thought out but they are all limited by our own flawed anatomy. The human body was not designed for swimming.

“If you go through the records of the US patent office, you will find 40-year old patents for monofins that are exactly the same shape as they are today.”

If you were to design a monofin or -foil, what would it look like?

“Given how we swim I would create a symmetrical high aspect ratio rigid or semi-rigid foil, placed outside of the bodies extremities. The lift/thrust to drag ratio would be better than that of any traditional mono fins, which are low aspect ratio and have more intrinsic drag.

It would also benefit from moving through unturbulent water. So I would create something like a tuna tail or bill fish and place it outside of my ankles. Sea turtles actually are a bit draggy themselves, that is why their fins evolved to be totally outside the drag area. ”

If you were to design bifins from scratch, what would they look like?

“Bifins have already gone through about as much evolution as they can. Only improvements in materials would make them better. Even so we should do a better job of matching fin angle, length and stiffness to individuals. Not everyone has the same flexibility and there are probably benefits in custom tuning.”

What do the tips of the bifins do? There are different shapes on the market. Are they effective over just a straight edge?

“Probably not. Actually you might gain more from strapping a foam block between your crotch to reduce drag there. Additionally some of those tip designs just increase your chances of damaging the fins.

“in contrast to the funky tip design, the rails actually make a difference. Except, they probably don’t need to be more than a few millimeters high.”

What is the advantage of a monofoil over a monofin?

“A gain in efficiency, this is due to loss of energy in bending moments across the surface of a mono-fin. Second is that a mono foil can potentially be designed with lower drag. A mono foil can also easily be made into a breakdown design or be “modular” and can easily be tuned to a persons individual size and flexibility. So all around a monofoil can be designed in a way that individuals can tune the fin to their own likes.”

Do you think it is possible to make foil-based bi-fins?

“Yes however the gains in performance will be marginal because the fins will still have to be located behind your body in turbulent water, they won’t get the same benefit of extending into unturbulent water. And they would likely be cumbersome and heavy which counteracts the overall goal.”

What do you think the future of monofins is?

“Traditional monofins are practically unchanged in shape for decades. We can make slight adjustments to materials but other than that it is hard to improve. Monofins work by cupping water and thrusting it behind the diver. The problem is that the human body is as streamlined as a brick, even if you have perfect posture. This causes turbulence and that in turn causes drag and reduces the effectiveness of the portion of the fin that is directly behind the diver.

Another issue is that the leading edge of monofins is usually made of rubber. Rubber elongates very well, and it is not a very effective spring. Divers spend a lot of energy just bending rubber, and that energy does not come back in the form of thrust. We could try to make the leading edge of carbon fiber or another more ‘springy’ material but that would add to the cost.

Even so, monofins are very simple and will probably remain in use for the foreseeable future. In the long term, I think we will see a transfer to monofoils, they can potentially be much more efficient. But it will take time, monofoils are difficult and expensive to design, even if the final product can be made of very cheap materials.”

(Youtube) Good explanation on strength and stiffness of fiberglass and carbon

Let us know what you would like to see in the future in the comments!

Jaap is a geologist by trade and a freediver by passion. Jaap wrote the book Longer and Deeper in 2018. His book teaches how to train for freediving and spearfishing on land.

Alpine and sea: What climbing can teach us for freediving

The terribly wrong image of freediving 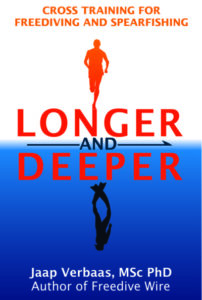